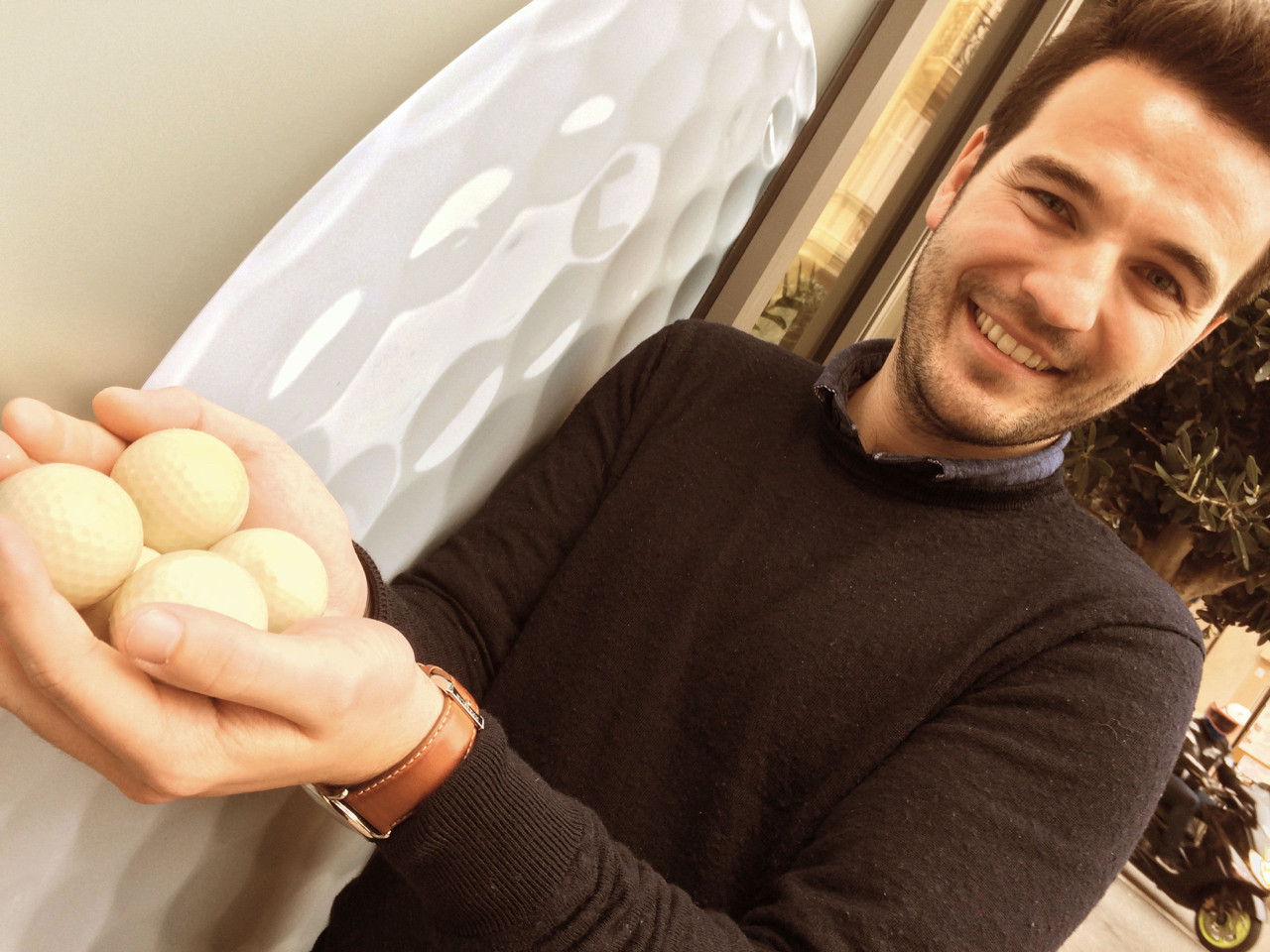 The 42nd Ryder Cup, where America’s top golfers compete against the best in Europe, will be held in continental Europe for only the second time in its history, at Le Golf National in Paris, from September 28 to 30, 2018.

Another historic golf tournament will take place a few months earlier, from June 15 to 18, and for the first time at the Monte Carlo Golf Club – the 2018 Monaco US Celebrity Golf Cup, which will bring Bill Clinton, Andy Garcia, Kenny G and some of America’s top football players, as well as 20 American businessmen paying to golf with the stars, to the Principality.

The link between these two major golf events is Susan Feaster, CEO of Ryder Cup France 2018 US Partners Club and Monaco US Celebrity Cup Chairman, who reminded MonacoUSA members and friends that “you are each an Ambassador to Monaco over the four days of events in June when Team USA and Team Europe come to the Principality.”

Ms Feaster also thanked Monaco US Celebrity Cup committee members Mike Powers and Henri Fissore, who were present, and spoke about the success of the first celebrity cup which took place in June 2016 at Royal Mougins Golf Club, where Team USA beat Team Europe 10-5 on a Match Play.

The tournament trophy will again be presented by HSH Prince Albert, who is the 2018 Honorary co-captain of Team USA, at an Awards Ceremony and Black Tie Gala on June 17 in the Yacht Club Ballroom.

The proceeds of this charity event will benefit the Ryder Cup Trust for the development of golf for youth, beginners, seniors and the disabled. In addition, a “Green Golf” gift will be made to the Prince Albert II Foundation for environmentally enhanced golf course construction and sustainability. 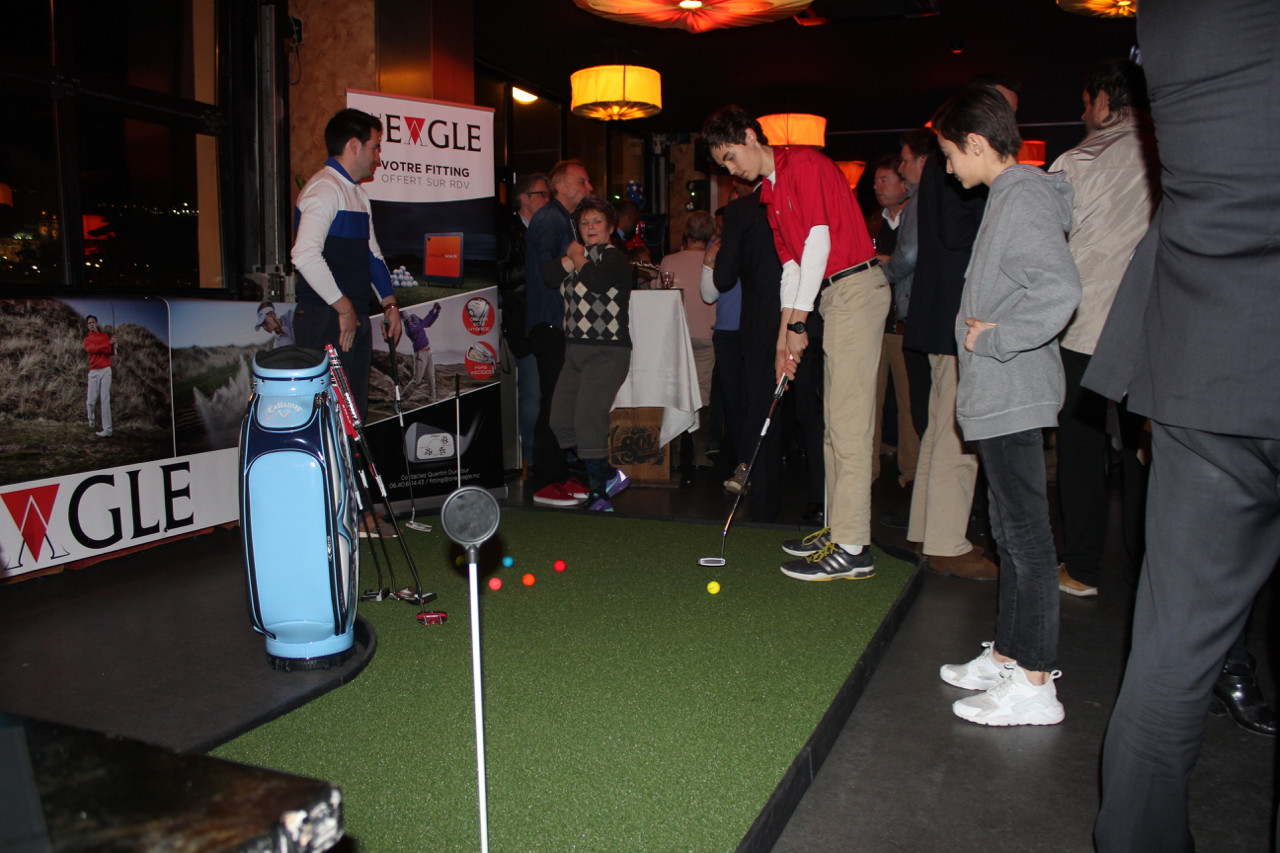 The networking evening was sponsored by Monaco’s only golf boutique and fitting centre, One Eagle, who set up an indoor putting green and provided an impressive fashion show, prompting “ohs and ahs” from many in the crowd who have never once swung a club.

A tombola was held with awesome prizes including private golf lessons at Royal Mougins with Stephane Damiano of Prime Golf Academy, a free swing assessment at One Eagle’s fitting centre and a bucket of EcoBioBalls, aka fish balls – non-toxic, biodegradable “eco” golf balls filled with fish food.

“What a cool idea for golfers who practice at sea,” commented MonacoUSA’s Executive Director Annette Anderson. Fish balls begin to dissolve after 24 hours, then fish begin eating the food inside after 36 hours before the balls fully dissipate after 28 days.

A great deal of energy went into the Ryder Cup discovery evening, as led by the inextinguishable Annette Anderson, Alicia Sedgwick, Master of Ceremonies of TEDxMonteCarlo who provided commentary for the fashion show, and the staff at Stars’n’Bars for their prompt and friendly service.

The 2018 Monaco US Celebrity Golf Cup kick-off was hosted at the Yacht Club of Monaco on July 4 by Susan Feaster and Monaco Life Publisher Eric Brundage. Article first published on February 14, 2018. 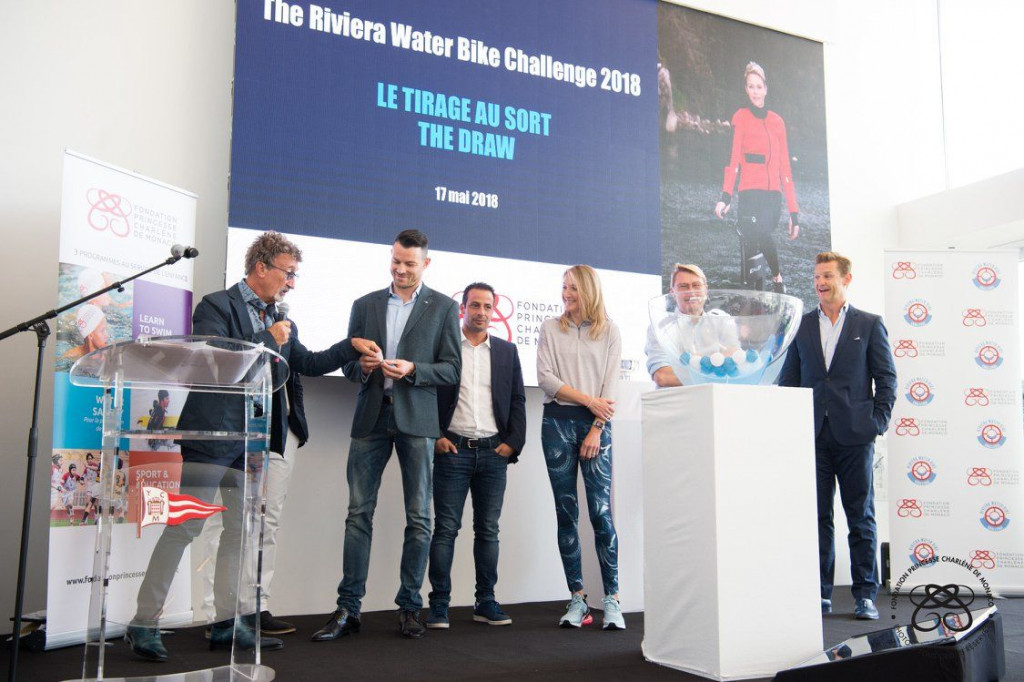 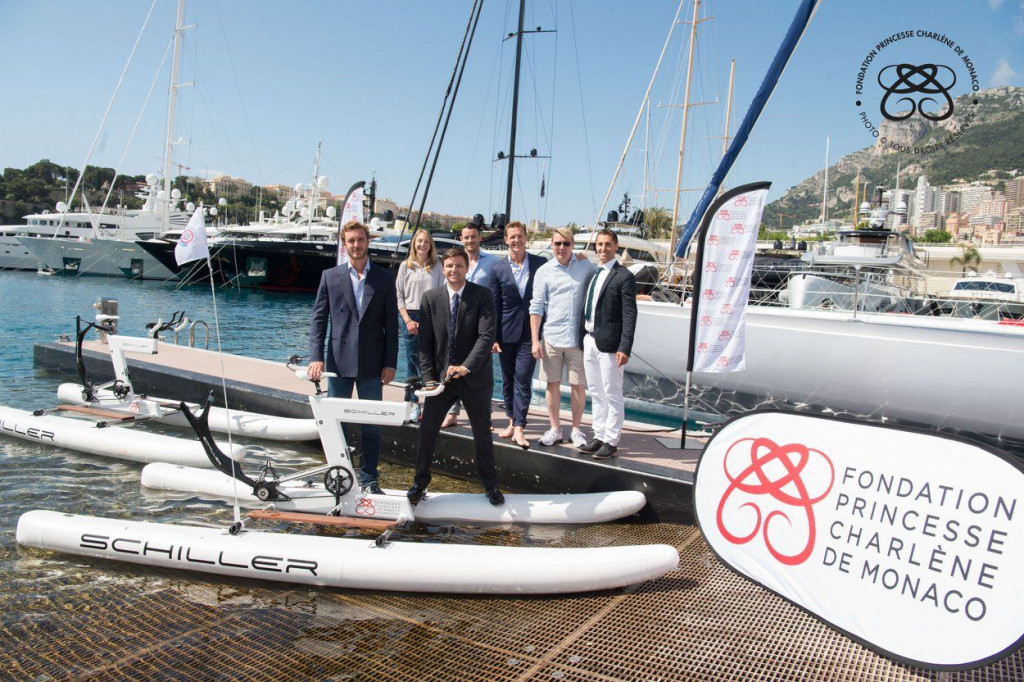 Pierre Casiraghi, Paula Radcliffe, Gareth Wittstock, Rudi Keil, Mika Hakkinen and Olivier Jenot. Photo: Eric Mathon/Palais Princier[/caption] A total of 22 teams and 44 athletes will participate in the fun event on June 17, starting at 10 am. Mixed teams of professional athletes and amateurs will compete on Schiller S1-C water bikes in a relay race covering 30 laps for a total distance of 20 km in front of the sun terrace on Monaco harbour’s sea wall. Merging modern design, technology, and engineering, these bikes are quiet, sustainable and 100-percent human powered. The public are invited to watch the race from the sun terrace on Monaco harbour’s sea wall where lots of family-friendly activities will be offered. Free admission. [caption id="attachment_31132" align="alignnone" width="640"] 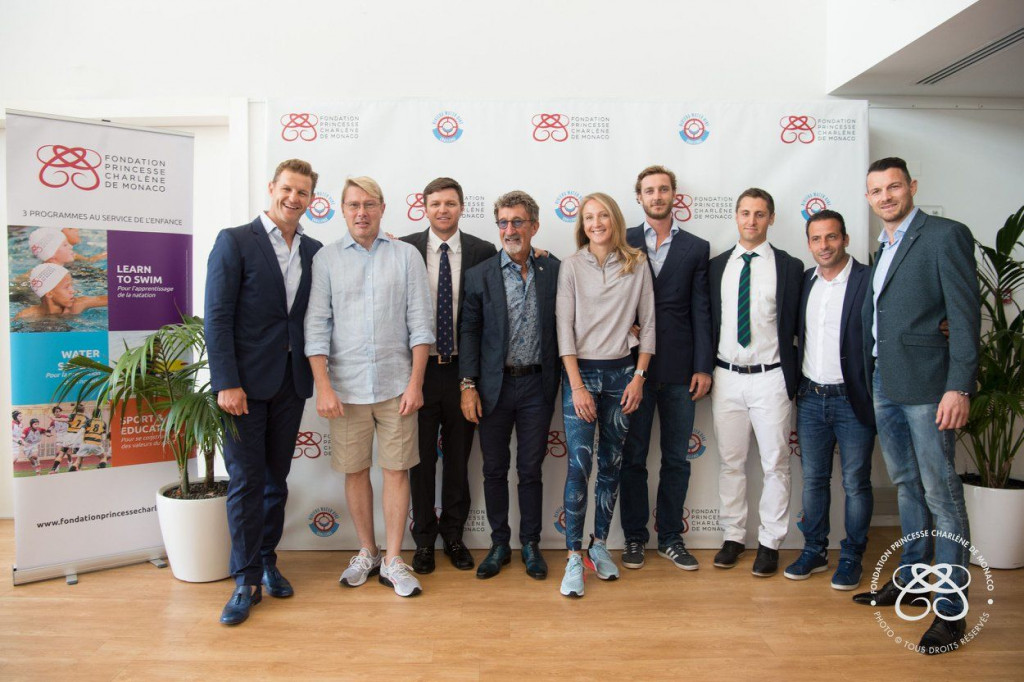 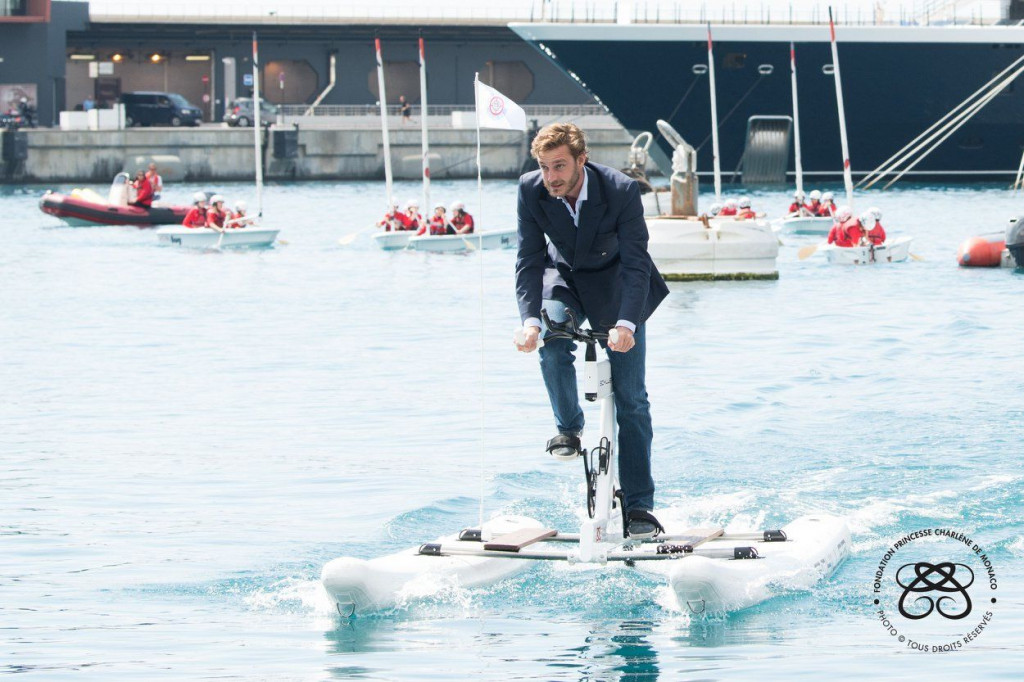 Pierre Casiraghi. Photo: Eric Mathon/Palais Princier[/caption] A number of “Learn to Swim” and “Water Safety” programmes have been implemented around the world in order to fight against this scourge. Since the Foundation’s creation, more than 500,000 people, mainly children, have benefited from these three programmes in 33 countries. [caption id="attachment_31129" align="alignnone" width="640"] 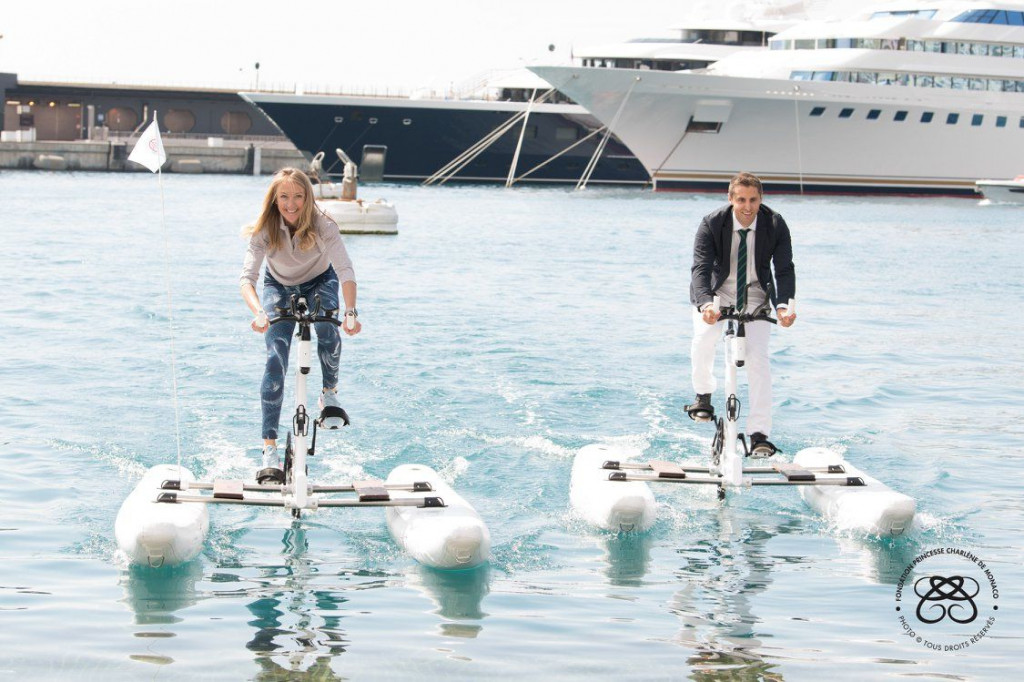